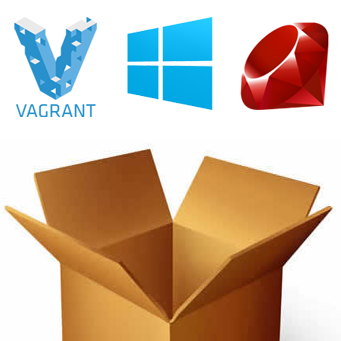 I do a lot of C# web development which means I have to work with Visual Studio on Windows. I usually grab the Mac to do my Ruby on Rails development, but it would be easier not to switch every time I have to do C# and Ruby development.

A while ago I tried several things getting a fast Rails experience on Windows, but it failed. It was just too slow … until now! In this post I’d like to share my current setup which I plan to use as long as it pleases me.

What are we going to do?

First let’s setup our Windows machine with the needed software.

Next we have to configure our project to create a box from the base box and make it install all our goodies we need to run our Rails application.

I’m using a gem called librarian-chef which actually is a bundler for your Chef recipes.

To install run the following from the root of you project:

I know we are trying to create a non-Ruby Windows solution but we do need this gem to work on Windows to complete our setup with Chef. If you really don’t want Ruby being installed on Windows, you should do the above steps on UNIX or OSX and also have to commit the cookbooks. This means we’re back at 1900 where everybody stuffed there vendor folder with code they found… If you do want to perform this on Windows and haven’t already installed Ruby, you should do this now (I suggest RubyInstaller).

The command librarian-chef init created the file chef/Cheffile where we can add our cookbooks. Mine contains the following:

As you can see I’ve setup Git, Ruby with rbenv, SQLite, MySQL, PostgreSQL and node.js for the asset pipeline. The apt cookbook is for running apt-get dist-upgrade and the cookbook database will be used later to create users to access the databases.

You could skip one or two of the database servers if you like, but it can’t harm if you do install them all and don’t use them.

Note: the database cookbook is provided with additional actions to set superuser privileges to PostgreSQL and MySQL.

Now that we have defined our cookbooks we need to run our final command so that Chef downloads them. Just as you would do with bundler we now run the following command from our chef/ folder

I had some difficulties with running bundle install because the Vagrant user didn’t have permissions on the rbenv gem folder, so I had to add a custom recipe for this. Also I’ve added a recipe to modify the pg_hba.conf file of PostgreSQL so that we can connect with the virtual machine. Finally I’ve created a file to add our database users with full permissions. Here are the 3 files I added:

Next we have to create a role that defines what recipes should be executed in what order. Create the file chef/roles/rails-dev.rb containing the following content:

If you removed some cookbooks from the chef/Cheffile you should also remove them here.

Next we need to create a Vagrantfile that contains the configurations for creating a box from the base box. Create the config file by running from the root of you project:

Note: precise64 is the name we used with the vagrant box add command from step 4 above.

Also we want to add the virtual machine folder to our .gitignore file:

Here’s the stripped version of how my file looks like:

Alright we’re ready. We now can boot up Vagrant which will take some time the first time because it will create a new box from the base box and install all the cookbooks. From then you’re able to connect with the box and use it just like you would do on UNIX or OSX.

A VirtualBox with Ubuntu precise 64 installed and containing the following software/configurations:

If you have to run specific Ruby (on Rails) tasks like rspec or bundle exec rails g migration you should do this within the ssh session of your box.

Editing files can be done on your Windows machine, because the root of you project is directly binded to the /vagrant/ folder on the box.